In recent years, corporate and investor-led funds and financial innovations have built expectations for a decarbonized future. However, the route forward is still uncertain. At VerdeXchange Conference, Dr. Nakicenovic moderated a panel as a member of the ICEF Steering Committee. The panel “Boosting Innovators of a Decarbonized Future“ highlighted the “Top 10 Innovations” and focused on the challenges that technology innovators still face in bringing product to market, and on feasible strategies that brighten the path to a decarbonized future. Also discussed was the rapid evolution of the market environment.

The session was moderated by Dr. Nebojsa Nakicenovic. Upon opening the session, he introduced the background and objectives of ICEF as well as the outcome of its most recent annual meeting.

The issues facing innovators were mentioned by Mr. Ken Alston, who had worked at the White House and the US Department of Energy as an advisor on Clean Energy Finance to the US Energy Secretary, Moniz in the Obama Administration. He pointed out that there are two gaps, so called as “valleys of death”, where innovators face difficulty in securing finance and survive. The first gap is between research / concept stage and the pilot stage, and the second gap is between the pilot stage and commercial stage. Generally speaking, banks would easily be interested in providing loans and equity at the commercial stage.

Mr. Alston highlighted the functions of public and private finance to address the gaps. To bridge the first gap, he stressed the importance of incubators. As an example, he introduced the program CalSEED, with funding from the California Energy Commission that works to provide entrepreneurs with non-dilutive capital of up to 600,000 dollars in this prototype stage, as well as regional incubation clusters that the California Energy Commissions supports. To survive above the second gap, he underscored the need of government-private sector partnership, drawing upon the example of Tesla which was able to work with the federal government in 2010 to receive a 465-million-dollar loan that helped them to retool a plant formerly owned by another car manufacturer.

Prof. Gaurav N. Sant and Mr. David Sudolsky were the other speakers. Their companies had won “Top 10 Innovations”, respectively. Prof. Sant spoke on the necessary business expertise of innovators, for example using low-cost materials, fitting within the existing supply chain and the existing materials ecosystem, and being able to demonstrate the process by competitive events such as Carbon XPRIZE of which his company was a finalist. Mr. Sudolsky spoke on the significance of entering into a partnership with established firms with acute sense of industrial technology and development in need. He introduced that his company had not raised from venture capital but strategic partners of multinational brand owners looking for early access to bio-sourced products and their contributions had been in cash and in in-kind.

Another issue discussed was CO2 and waste plastics utilization. Low-carbon products such as CO2-absorbing concrete and plastics of biogenic resources are attracting attention not only because they cater to the need of being reducing CO2 emission, but also they are compatible with the concept of circular economy which is increasingly being regarded as important, in that CO2-absorbing concrete can eventually be made to recycle CO2 as a feed stock in and of itself, and Anellotech’s products can also incorporate waste plastics. 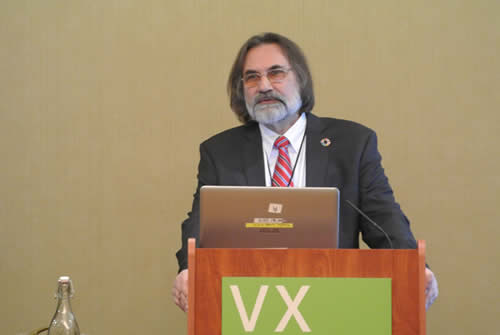 ICEF was organized by the initiative of the Prime Minister of Japan Abe five years ago. The objective is to provide opportunities to raise awareness and promote discussion about innovations for climate change mitigation. Another important objective is to expand international networks of leading figures of industry, academia and government. ICEF is supported by NEDO with guidance of the Steering Committee that includes 17 experts from 12 countries with diverse backgrounds.

The fifth ICEF in 2018 boosted more than thousand participants. It consisted of three plenary sessions and twelve concurrent ones covering important social and technological innovations ranging from energy supply and conversion to end use. A key outcome is a Statement highlighting the need to achieve net-zero carbon emissions in the world against the still raising trends. Vigorous action is needed with a combination of climate change mitigation and economic development. Appropriate investment and financing is essential as well as the facilitation of international collaboration. The Statement concludes with three key actions needed to achieve deep emission reductions: Inspire investment in technology; Involve consumers and producers; and Internationalize cooperative efforts.

Another salient ICEF activity are innovation roadmaps that included so far carbon utilization and energy storage, both technologies essential for achieving net-zero emissions. In 2018 a new roadmap was presented on direct capture of carbon dioxide from the atmosphere.

Selection of the “Top 10 Innovations” by the participants is the highlight of ICEF. After the introduction to ICEF and the session by the chairperson, this was the focus of the panel discussion at VerdeXchange Conference hosted by ICEF. Gaurav N. Sant and David Sudolsky presented each one of the top 10 in 2018 and 2017, respectively. Ken Alston complemented the two presentations by a perspective from financial and private sectors.

The discussion among the panelists was followed by the interaction with the audience including an intervention from NEDO Chairman.

Election of top 10 innovations during ICEF has an important “radar” function, namely in presenting and reviewing new and innovative technologies and business models to achieve net-zero emissions. It was suggested that a meeting of all top 10 innovators to review experience and development since the award would be useful for exchanging ideas of how to accelerate change. Another was that partnership with established firms experience in technology development could make a difference between success of an innovation and failure. In any case, innovators need to acquire and build on necessary business expertise for reducing costs, fitting within the existing supply chain and the existing materials. This is all needed to overcome so-called “valleys of death”, where innovators face difficulty in securing finance and surviving. Appropriate investment and financing is essential for success of innovations highlighting the essential functions of public and private finance.